Faslane comes to Edinburgh: Lessons from the forefront of the anti-nuclear movement

In 1982, a small group of activists pitched tents along the treeline across the busy road that feeds into Faslane Naval Base, the home of Great Britain’s nuclear deterrent, Polaris. They planned to stay for two weeks. They could not have guessed that thirty five years later, their small protest would have evolved into the permanent occupation of the land and the establishment of an egalitarian, anarchist, community based protest site which has become a hub for Scottish activism, and the ‘front lines’ of the anti-nuclear struggle. 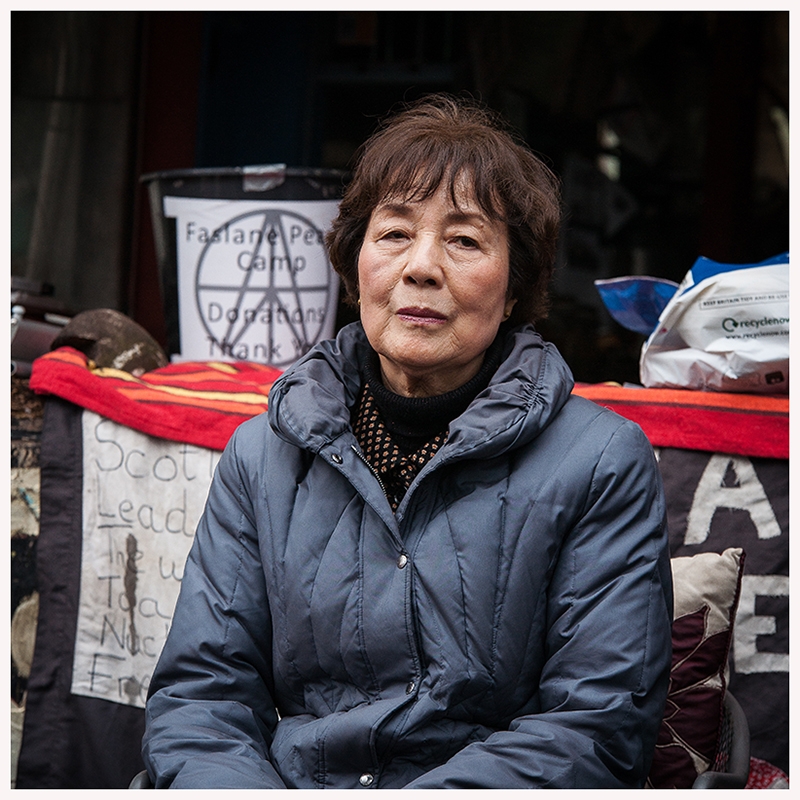 Since its inception, thousands have passed through Faslane peace camp, to live, visit or support. Hundreds of direct-actions have taken place to disrupt and bring awareness to the activities ongoing within the Naval Base. The peace camp’s continued livelihood is testament to the necessity of its cause, which has attracted activists from all over the world, and bred good relations with other organisations, such as the Campaign for Nuclear Disarmament, Trident Ploughshares and Nukewatch to name but a few with whom the camp has collaborated this year alone.

2017 has seen mounting nuclear tensions between nations, reaffirming the need to question and dismantle the role of nuclear weaponry in modern warfare. The camp’s activity this year has sought to react and engage with local and global politics, whilst continuing to build ties with other activist communities and the public.

In January, the word learned of the Trident misfire that had occurred the previous June. There was widespread public outcry over the secrecy with which the event had been treated and Theresa May’s continued evasiveness when confronted with it.

The peace camp responded with a series of road blockades, disrupting access into Faslane Naval Base. During the first of these, three campers were arrested and released without charge. On the second five activists, Chloe Mckirdle, Gary McDonald, Iain Oliver, Kaitlyn Lavin and Matthew Watling successfully held the road for three hours and have been charged with breach of the peace. The case is still open, but bail conditions have been dropped. This second arrest received no media attention.

In March, the peace camp was visited by members of the Hibakusha (the Japanese name given to survivors of the atomic holocausts at Hiroshima and Nagisaki) who had last visited in 1985, when they brought and planted the camp’s iconic cherry tree, a sapling that had too, somehow survived the blast. The visit was highly emotional for all who were present, and reaffirmed the necessity for such a movement in the present. Among those who were there to document the visit was photographer Gareth King, whose exhibition is presented this October as part of the Edinburgh Justice Festival.

At the beginning of July, representatives from over 100 nations met at a conference held by the UN regarding their commitment to a Nuclear Ban Treaty. The United Kingdom did not send a representative to be a part of these discussions. Activists from Faslane joined a week long action hosted by Trident Ploughshares at Coulport, a base on a neighbouring peninsula to Faslane which houses Britain’s arsenal of thermonuclear warheads. Among those arrested for blockading were long-time anti-nuclear activists Brian Quail and Angie Zelter, who were imprisoned following their refusal to accept bail conditions that would prohibit their presence near the base. The peace campers took on the role of ‘legal observers’, with Matthew noting that it was ‘awesome and inspiring’ to join with and learn from a seasoned generation of activists.

In August, the peace camp was joined by activists from South Korea, who, in light of the mounting nuclear tensions between North Korea and the US, had embarked on a campaign across nations to encourage global nuclear disarmament and an end to American military involvement in South Korea. They gave a talk at the camp, and then together with the peace campers and members of Trident Ploughshares, they held vigil at the North Gate of the Naval Base.

Along with Stop The Arms Fair, Campaign Against the Arms Trade, Trident Ploughshares, Nukewatch and Yorkshire CND, peace camp activists engaged in a series of direct actions on Wednesday September 6. Activists blockaded the West entrance to London’s ExCel centre for over five hours before they were removed and arrested. They join over a hundred other activists who were arrested over the course of the week. The four have since been charged with aggravated trespass and will appear in court later this month.

In a live-stream of the blockade, found on the peace camp’s Facebook page, the activists were asked why the Arms Fair was so important to disrupt. Chloe Mckirdle responded with remarks on the ongoing conflict between Saudi Arabia and Yemen, facilitated by the United Kingdom’s political ambition and weaponry industry. “On a level, what we’re doing, lying down on the road with our arms in a big tube, it seems a bit mental. But I think it’s absolutely justified if you just look at the bigger picture. We’re arming wars halfway across the world. We’re engaging with nuclear weaponry. It’s the end of the world as we know it.”

Since their return from London the camp has engaged with non-arrestable activity. They have shown a presence at the IndyRef demo in Glasgow, run stalls in Edinburgh and Dumbarton, and spoken at the opening of Gareth King’s exhibition as part of the Edinburgh Justice Festival. They have spent time visiting and networking at other British protest sites and attending meetings with the Campaign for Nuclear Disarmament.

But the year is not over yet! For more information or to keep up to date with what the peace campers are up to, have a look at the Facebook page or come along to Edinburgh CND’s event this evening on Faslane Peace Camp: What can we learn?