Food sovereignty: The tide sweeping away capitalism and patriarchy? 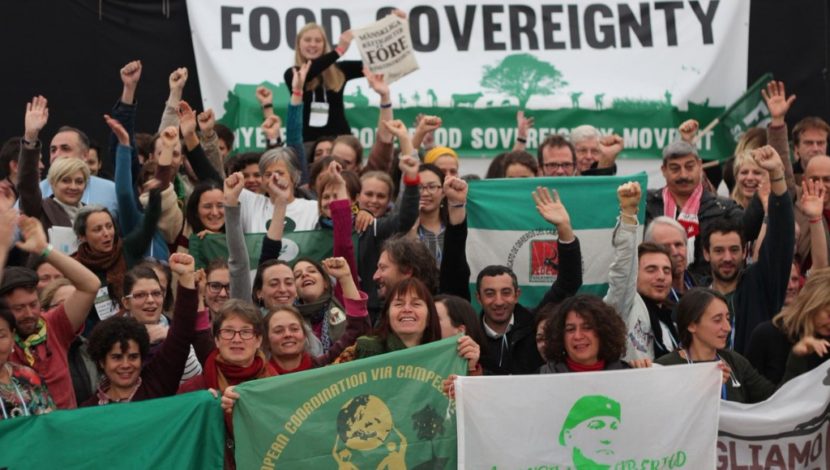 Did you know that 70% of the world’s food supply is produced by small scale farmers? This global grassroots movement shows a new world is possible through sustainable small-scale farming, dismantling patriarchy and capitalism; yet it is barely seen, either in our parliament nor in our supermarkets.

So what is this movement and why is it different? In contrast to industrial farming which creates monocultures, reducing biodiversity and destroys land through overworking it, small scale farming sequesters carbon and focuses on feeding people rather accumulating capital. This will be the topic of an amazing talk in the Edinburgh World Justice Festival on Saturday the 30th of September (see here for tickets).

Friends of the Earth and Nourish are going to lead a discussion on the grassroots social movement of small scale peasant farmers, fighting to protect this important source of livelihoods and a sustainable future. Under the banner of the organisation Via Campesina, the international peasant’s’ movement, they have been joined by over 300 million members across the globe since their inception in 1996. They see the future as being one of food sovereignty with the people who produce, distribute, and consume food controlling the mechanisms and policies of food production and distribution.

They are setting the agenda for the future of the food system through direct actions, such as land occupation and protests, combined with dialogue with governments and other social movements and NGO’s.

Kirtana Chandrasekaran from Friends of the Earth International, talked to me about what makes this movement different and special.

She argued that many organisations choose to focus on one issue and go from there. Via Campesina know that no issue exists on its own, so instead link the issue of food sovereignty with migrant rights, politics and many more issues facing us today such as gender and man-made inequality. In Kirtana’s own words, “What we want to achieve in food sovereignty cannot be done without gender justice.”

In a world that is increasingly disparate, Via Campesina is constantly evolving and becoming more intersectional. They know that staying still means that we won’t be able to combat issues like climate change.

The workshop on Saturday gives positive examples of how the food system is changing around the world, and discuss what food sovereignty might mean for Scotland. Bella Crowe, Policy Officer, of Nourish Scotland will explain how they are campaigning for a food system which is that is fair to people and works with nature.

As well as Kirtana and Bella, the event will hear about the Landless Workers’ Movement (MST) in Brazil from Graham McGeoch, who has firsthand experience of this, ‘the largest social movement in Latin America.’ With an estimated 1.5 million landless members’ it organises occupation of unused agricultural land and creates new democratic communities which provide livelihoods, school and health care.

Matthew Crighton of Friends of the Earth Edinburgh said  “This promises to be a really interesting discussion that will have something for everyone who cares about the food we eat, the people who make it, the climate, and what we are doing to our planet”.