How Welcoming is Scotland?

The Edinburgh World Justice Festival launched this week, with a strong theme of anti-racism, community activism and inclusion. The first in a series of events was ‘The hate stops here!’ on how to oppose racism in our communities and on the streets, with Hope not Hate running a soon-to-be sell-out event this Friday on ‘How welcoming is Scotland: Views on Inclusivity and belonging. 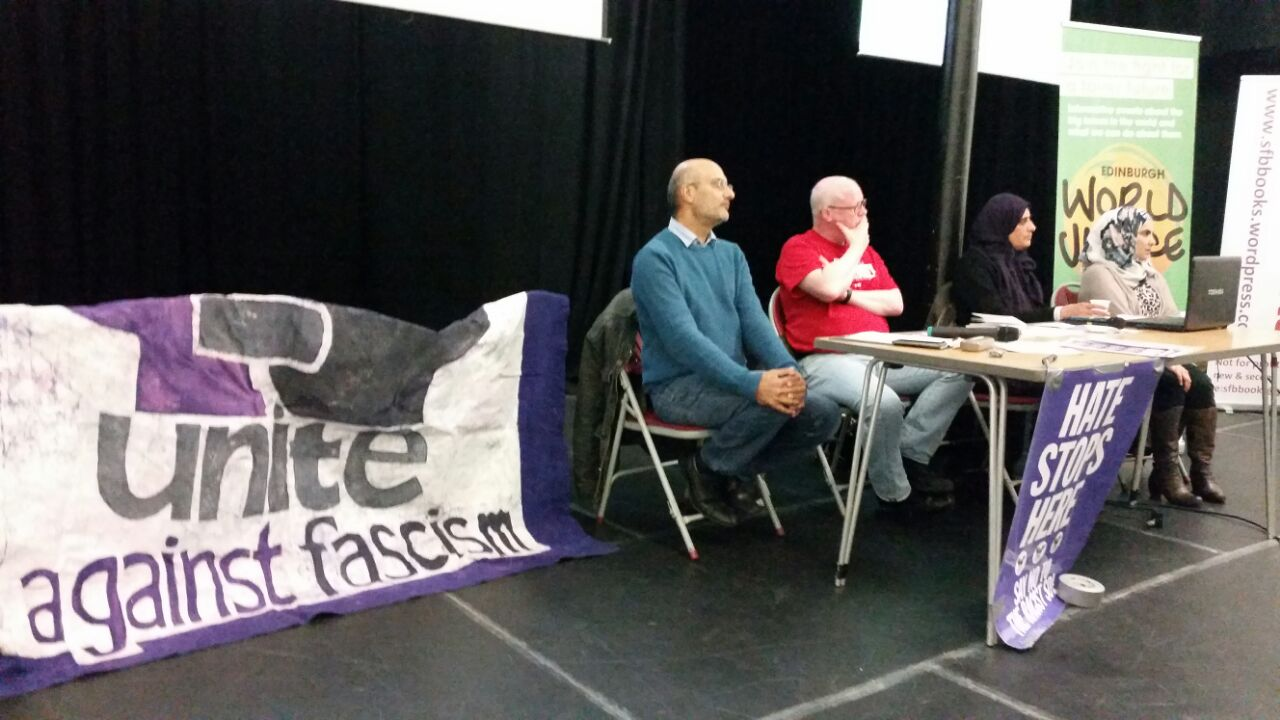 The event, organised by Edinburgh Unite Against Fascism and Muslim Women’s Association Edinburgh was focused on how important is to promote tolerance and social cohesion between communities, especially now when media and politics fuel racism and attacks on Muslims. This debate comes, unfortunately, at yet another crucial juncture in the politics of arms, race and violence.

On the same day, a man later identified as 64-year-old Stephen Craig Paddock killed at least 58 people and injured over 500, opening fire at a country music festival in Las Vegas. The attacker is believed to have acted alone, committed suicide and the motives for his action, at least in the media, are being portrayed as unclear.

Immediately the attacker was described as a “lone wolf”, a person who plans and commits a violent attack alone. The attacker had not been called terrorist, which were we to adhere to the true discursive connotations of this word, would perhaps be accurate at this point. With no clear motive, we are told, and without the support of a larger organisation (we are also told), influenced by a political or ideological cause, should this be labelled terrorism?

Yet as well as we know, the media do not hesitate to label any attacks perpetrated by people of Muslim heritage and generally non-whites, as acts of terrorism, not waiting for further information about the motives of the attackers to be released. White attackers are described either lone wolves or mass murderers, suffering from mental illness, with the message of attacks such as these shrouded in this depoliticised language. The motives, as true a form of terrorism as anything, purely to inspire terror. The organisations? Well the National Rifle Association with its 5 million members in the US and widespread political influence would certainly constitute a larger organisation, political or ideological cause no?

This discrepancy comes as no surprise to many now. And yet it bears repeating. Ad nauseam. Until it finally sinks in. Donald Trump referred to the Las Vegas shooting as a “terrible shooting”, has doled out some platitudes of condolences to the families, but has made no reference to this as yet another example of right-wing terrorism, the deadliest in America, with the Orlando shooting falling in close second.

It is an undeniable fact that this response by the media and politicians is dangerous and can lead to further violence. Such coverage amplifies ignorance and impacts on innocent people through fuelling polarisation, discrimination, racism and ethno-politics. As result Muslim communities are alienated and feel neglected by the Western societies in which they live. There is also an imminent danger that the media-hyped Islamophobia may inspire attacks on Muslims, such as attack in London, when a van was ploughed into Muslim worshippers in Finsbury Park and the multiple attacks on mosques which have become a near-weekly occurrence in this country.

The dangers of this Islamophobic discourse in media and politics were discussed yesterday in an inspiring talk “The hate stops here”. The speakers Dr Tom Webster (UAF) , Tasneem Ali and Nazima Khan (MWAE)  highlighted how important is to educate and promote tolerance in our communities to stop hate and racism.

So far, Scotland had largely avoided attacks against Muslims on its soil, however the rise of UKIP and the Brexit vote had triggered tensions even here. The SDL, though small, has a presence in Scotland and occasionally organises marches in Scottish cities. The group claims it is not anti-immigrant and even argues that they protect human rights from the spreading of Islam and Sharia law.

Moreover in September 2016, Edinburgh mosque was hit by a petrol bomb, launched by Thomas Conington who was later jailed for almost four years. As an act of solidarity with the Muslim community of Edinburgh, hundreds gathered to protest this hate crime, a rally organised by Unite against Fascism Scotland. One of the speakers, Dr Tom Webster talked about the importance of such rallies and demonstrations against such acts of racism. He argued that it’s necessary for all people to unite and organise counter events against the SDL and racism in order to decisively show that groups such as SDL are not speaking for us.

Another way to fight racism is through socialisation and education. Tasneem Ali and Nazima Khan, who volunteer and campaign for Muslim Women Edinburgh Association (MWAE) of Edinburgh showed how racism can be combatted by building community cohesion through social and educational activities. The MWAE organise groups such as Toddler group or Gardening club, also open to non-Muslims. Such events promote tolerance, build strong community ties in Edinburgh and can effectively challenge racist discourse.

It is more important than ever to find inspiration, education and motivation to fight the spread of ideas that preach hatred and the yesterday’s event showed us that it is possible.

The next event in this series is organised by Hope not Hate, on ‘How welcoming is Scotland: Views on inclusivity and belonging’. Jules Stapleton Barnes, one of the speakers for the event, told us that:

“I look forward to exploring how welcoming Scotland is for LGBT people, what we think this means and what it looks like to those who feel they already belong. I’m particularly keen however, to explore the reality of people’s experience and what Scotland is like today, for those who hope to belong in future.”